ATHENS, Ga. — Jack Podlesny couldn’t remember if it was the second or third time he jogged onto the field for a field goal Saturday night. But he could tell his owner Stetson Bennett, whose primary role is being Georgia’s quarterback, was frustrated.

“He’s out there shaking his head. He’s like, ‘Oh man, that’s not great. That’s not seven points; that’s just three,'” Podlesny said. “Once it goes through the posts, it changes a bit.”

A little but not much. Thanks to Podlesny, the Kirby Smart “Mr. Consistently,” Georgia has the best red-zone percentage in the nation — counting field goals. But when counting only touchdowns, Georgia falls back to 52nd place. That’s the number Smart and his associates seem to be tracking closely.

“We started very slowly offensively in that area and we got into our 20s and we sneaked up and it got really good,” Smart said Monday. “Then we took a step back last week.”

As a matter of fact. Out of five trips to the red zone, Georgia reached the end zone…once. It opted for Podlesny field goals three times, and the last time Smart got so fed up he decided to try fourth and score from the 1. But a run down the middle behind Jalen Carter — likely a better defensive tackle as he’s a full-back — was stopped short.

Smart was emphatic after the game that the Bulldogs should be able to go that close range. On Monday he was asked more specifically how they can do that. He wouldn’t tell future opponents any changes the coaches might make, but went into the thought process.

“I mean, be creative,” he said. “You have to sit down and think, ‘Are we in the best staffing group for this? Do we give it to the right side? Are we attacking the weakness of the defense?’ There are all sorts of things that go in. Where are their best players, where are our best players?” 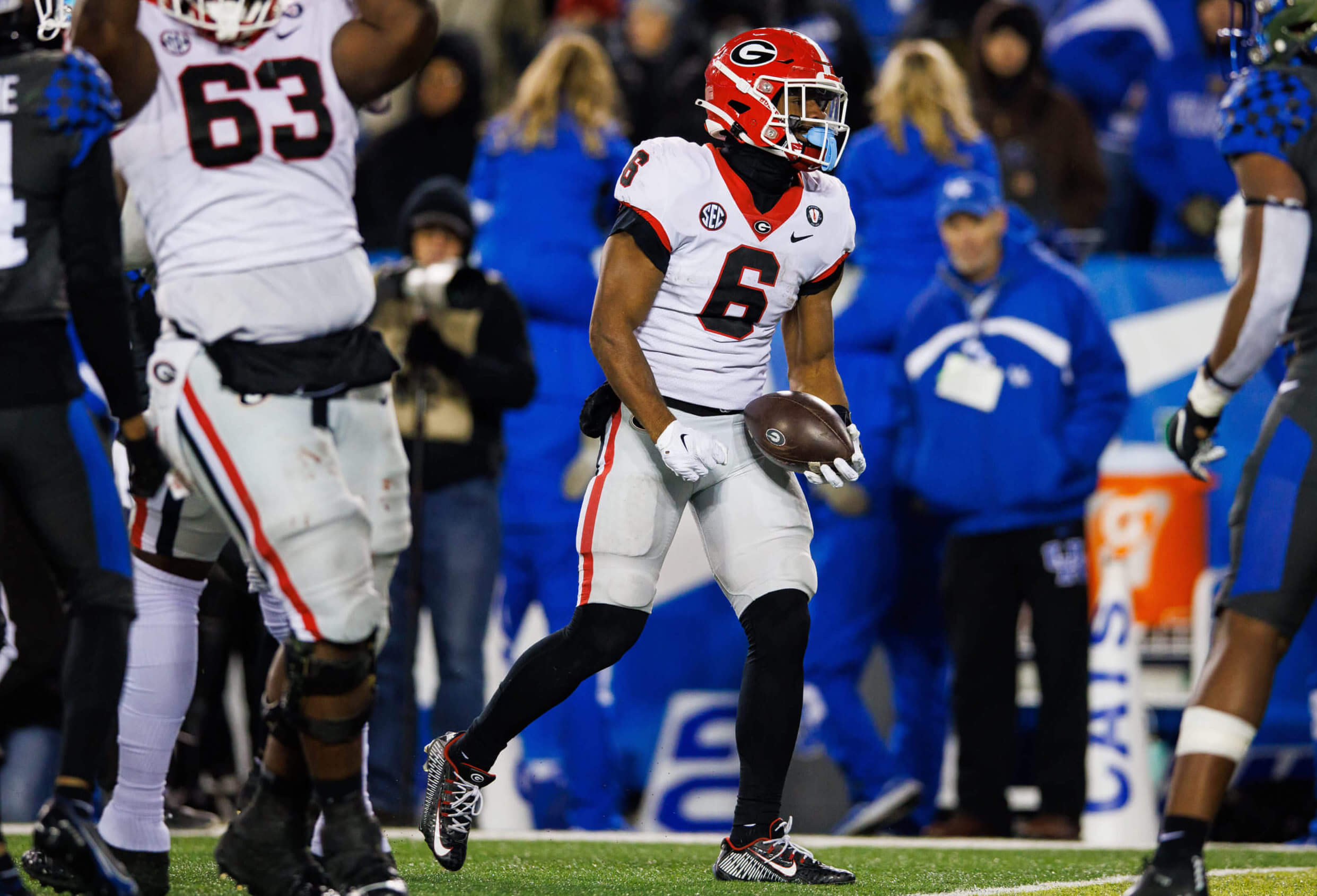 Kenny McIntosh (6) and the Georgia offense had one touchdown in five red zone trips on Saturday. (Jordan Prather / USA Today)

On the whole, this may not be a big problem. Georgia, along with three other teams, has the most trips to the red zone in the country, meaning more opportunities for failure and potentially skewing the scale of the troubles. And by some standards, the offense down there has been productive: Georgia is averaging 5.52 points per trip to the red zone, which ranks 14th nationally, and is one of 19 FBS teams not to commit a turnover in the red .

Still, this team is entering a postseason where leaving points on the board could be fatal. So what was the problem?

But how come an offense good enough to average 5.4 yards per rush and blessed with two dominant tight ends often stagnates near the goal line? The predictability of the calls in mid-Kentucky might have something to do with it. However, a closer look at the metrics offers some mixed evidence:

Passes from the 5-yard line or closer: Georgia is 8 of 12 with six touchdowns and ranks 13th in that situation, with no interceptions and no sacks. (Georgia has fallen behind to pass 24.5 percent of the time, the 72nd highest rate in FBS).

Aside from the goal line, short-range situations were pretty average:

Third and short passes: Georgia has converted the first down 9 of 16 times (56.3 percent), which ranks 50th nationally.

But for all third losses, Georgia has the fifth-best percentage in the country (51 percent). So, compared to expectations, the offense was worse at third-and-short than at third-and-medium or third-and-long. This can manifest itself near the goal line.

“Our concern is execution,” Smart said. “It’s not like you can say it’s a thing or ‘Oh, you’ve got a problem here. No, you didn’t do that right.’ We can point to every game and say that we made a mistake here. And if you make a mistake here, don’t convert, you’re playing good defense, you’re capitalizing.”

Smart added, “It’s one of those things that we need to keep working on and getting better at.”

The good news for Georgia: their own defense comes first. Opponents got there 24 times and only reached the end zone seven times (29 percent).

Georgia linebacker Jamon Dumas-Johnson had a good explanation for this.

“You know they won’t run up the middle,” he said, alluding to the presence of Carter but also others, including himself. “There’s only three things you can do, but one of them isn’t an option, so there’s only two things you can do. There’s not a lot of grass back there, so it’s definitely going to be harder to play us in the red zone. As long as there is a finite number of plays, the offense can run down there, and we study it Monday through Thursday. Most likely we know what you are going to do.”

Which brings us back to the Georgia offense and what opponents know or think the Bulldogs could do. You’ve seen Georgia hit in traditional sprints. But they’ve also seen Bennett fake a handoff and run a keeper (vs. Kent State), Brock Bowers hit an endaround (also v. Kent State), and hit Bennett Bowers and Washington for 2-yard touchdown passes (both at State Mississippi). ).

So, were the more predictable run-up-the-middle calls a simple belief that Georgia should be able to do it, or a case of holding a call to use in the postseason? Smart obviously didn’t want to say that. All he knew was that, as happy as he was about Podlesny, he’d rather use him less.

“It’s a luxury to have him,” Smart said. “But you know, the more we use it, the more we realize that these are still dots on the board.”