An office building in Sweet Auburn that was almost lost to redevelopment is among “Places in Danger” on the Georgia Trust for Historic Preservation’s annual list of the 10 Most Endangered Historic Sites.

The 2023 list — announced Nov. 16 and dated to encourage rescue efforts in the coming year — includes five locations in Metro Atlanta and others across the country, from schools to a half-ruined mill.

This is the 18th annual listing of the Georgia Trust, based in Atlanta. The focus is on significant historic buildings or sites that face a “serious threat” to their existence or integrity and have a “demonstrable level of community commitment and support for preservation.” The Georgia Trust specifically highlights those with active conservation efforts who may benefit from listing.

Many sites on previous lists have been saved, or at least are not lost yet. Among those on the list last year was the Atlanta site of the Chattahoochee Brick Company, known to use prisoner slave labor. The city has pushed ahead with plans this year to preserve the site as a memorial and park.

“We hope the list will continue to bring conservation solutions to Georgia’s historical resources at risk by highlighting ten representative sites,” said Mark C. McDonald, President and CEO of Georgia Trust, in a press release.

The local Atlanta Preservation Center (APC) led the advocacy group to save the 229 Auburn Ave. office building this year, which the Georgia Trust joined. APC Executive Director David Yoakley Mitchell successfully nominated this building, as well as the Old Campbell County Courthouse in Fairburn, for this year’s list, demonstrating the continued alignment of the two nonprofit organizations to sustain specific advocacy efforts.

“The joining of these two significant and vulnerable structures, identified and shared throughout the state, is an example of a genuine desire to see our culture and identity both preserved and preserved,” Mitchell said. “As we all get to know each other better, these places will serve as guideposts to improve this work. The partnerships that emerge in this process make it very satisfying to draw attention to the meaningful work of heritage preservation.”

Below are the Georgia Trust’s details on this year’s “Places at Risk” and the threats they face.

Between 1892 and 1908, this long-vacant office building in Atlanta’s Sweet Auburn housed Georgia’s first black-owned state-approved bank and a branch of the Atlanta Life Insurance Company, a major black-owned corporation. That makes it a significant survivor of the neighborhood’s origins as a bastion of black community wealth and independence in the Jim Crow era of racial segregation and violence.

The building, long threatened by neglect, faced a demolition order from the city this year due to its condition and was spurred by a plan to replace it and much of its block with a mixed-use redevelopment featuring affordable housing, such as SaportaReport first revealed. Under public pressure, the developers — Butler Street Community Development Corporation (CDC) and Gorman & Company — agreed to save the office building and include it in the plan.

“While owners and developers are in the planning process, the rehabilitation and wise reuse of 229 Auburn is critical to the long-term preservation of this district to maintain its national importance,” says the Georgia Trust.

There is also a larger conservation context as the CDC also owns two other historic buildings across the street and has plans to reuse them: Butler Street YMCA and the 1948 Walden Building. 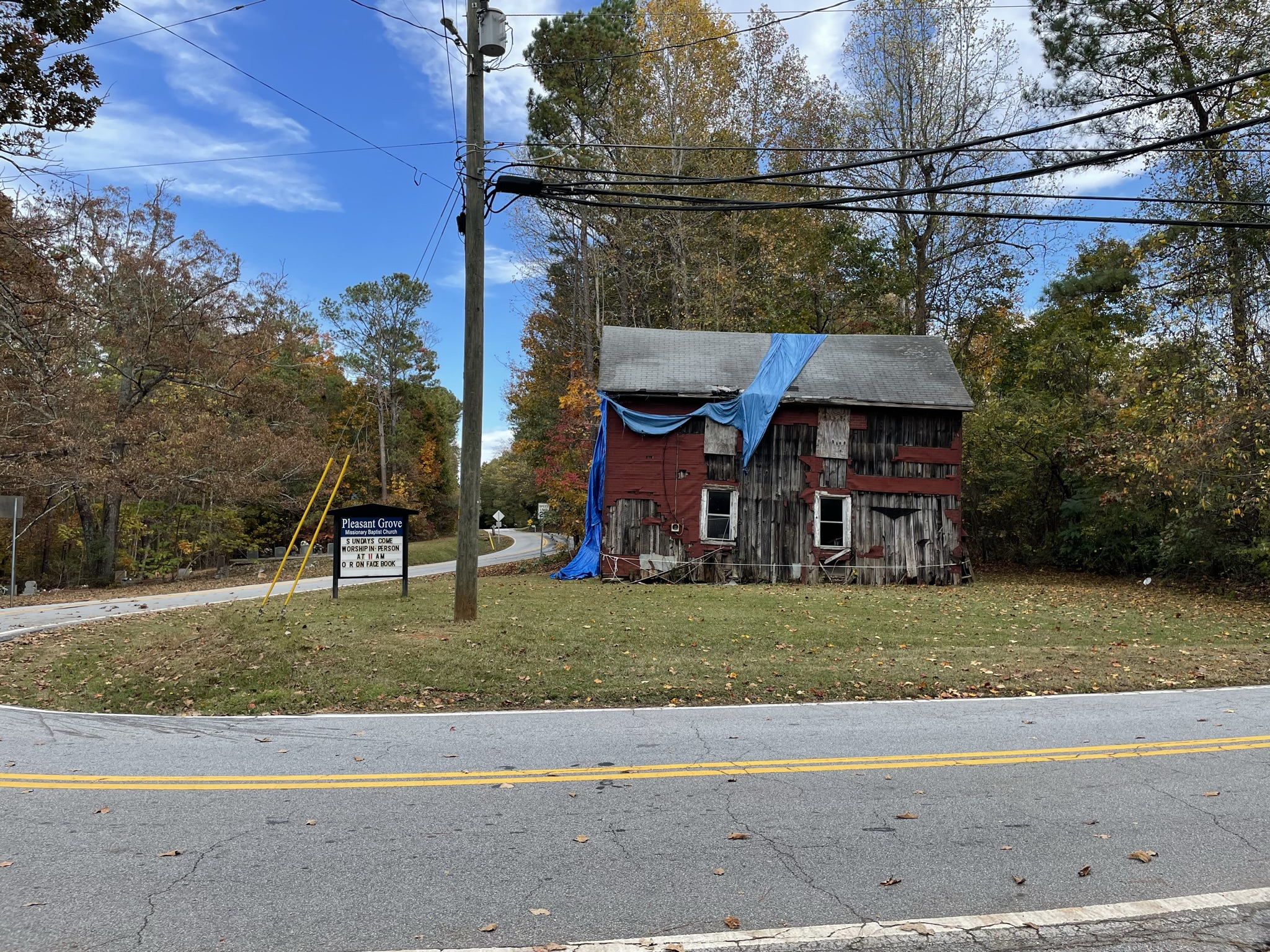 The Beulah Grove Lodge and School. (Photo by Georgia Trust for Historic Preservation.)

This combination Masonic lodge and school in Douglasville was built circa 1910 as the brainchild of Jack Smith, who had been enslaved and provided land for the plan and neighboring Pleasant Grove Baptist Church in 1881. The building has not been used regularly for almost 40 years.

“Beulah Grove Lodge and School is an important piece of history in Jim Crow South,” says the Georgia Trust, noting that Douglas County recently added it to the South Georgia Scenic Bypass Route, a state-sponsored tourism initiative, “to encourage it involved to see how this important historic site is saved.” 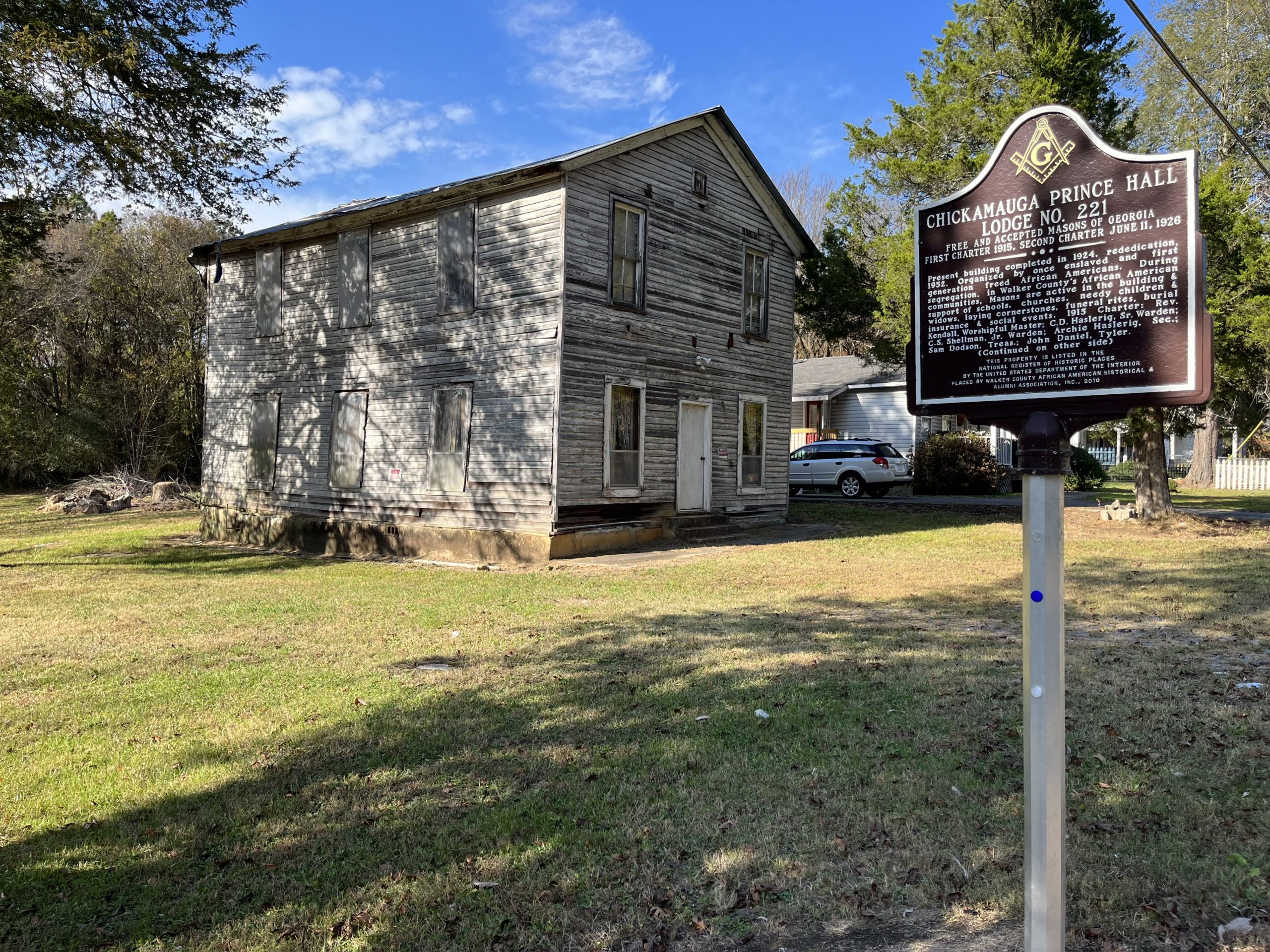 This Prince Hall Masons Lodge was founded in 1916 by formerly enslaved and first generation liberated African Americans. The original building burned down and the current one dates from 1924. The lodge was also home to the Walker County African American VFW in the 1940s and the Order of the Eastern Star during the same period.

“The interior and exterior of the building are in need of refurbishment. Urgent needs include a new roof and structural assessment,” says the Georgia Trust. “The building, now overseen by local Freemasons from other regional lodges, remains an important site for the African American community in Chickamauga.” 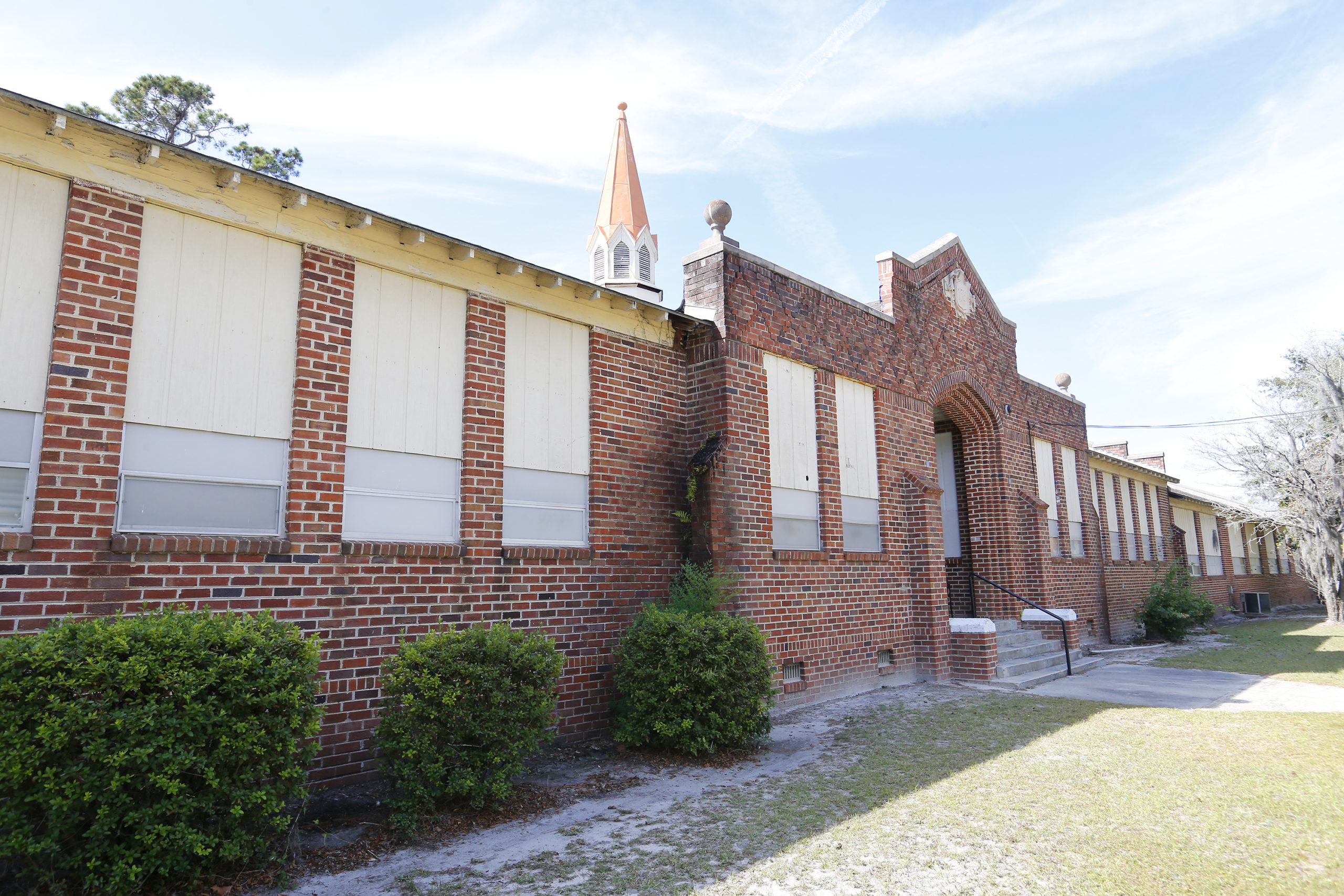 This former school in Valdosta was built in 1928 for African American students and is the only surviving school building from this period. Among the prominent alumni was Louis E. Lomax, the country’s first African-American television journalist. The building is now used as the Coastal Plain Area Economic Opportunity Authority’s community center and services for low-income households, but parts are unsafe. “The Economic Opportunity Authority, in partnership with the Valdosta Heritage Foundation and a local Rotary Club chapter, hopes to preserve this portion of Valdosta’s African American heritage by restoring Dasher High School and using it to better serve its residents,” says the Georgia Trust. 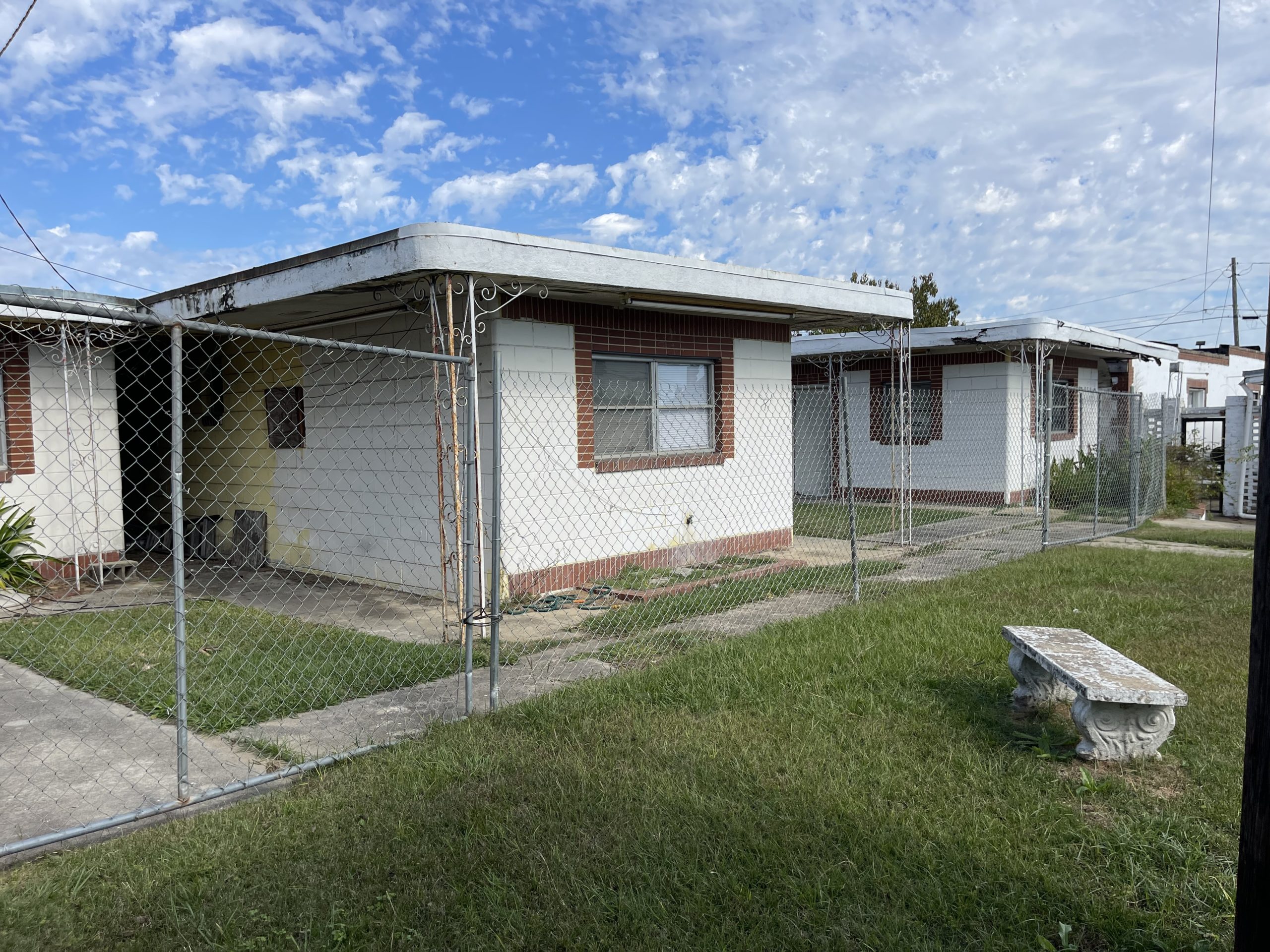 The Dudley Motel. (Photo by Georgia Trust for Historic Preservation.)

This small Dublin motel in Laurens County was opened in 1958 by Herbert “Hub” Dudley to serve black travelers in the civil rights era, with guests including Martin Luther King Jr. and Andrew Young. It has been listed in African American guidebooks such as the Green Book. It closed in the 1980s and has remained vacant, but its original features remain.

“Although it has been identified as a significant site with potential for heritage tourism, a conservation plan is needed to protect and restore the hotel, both for its cultural significance and for its example of mid-century architecture,” says the Georgia Trust. 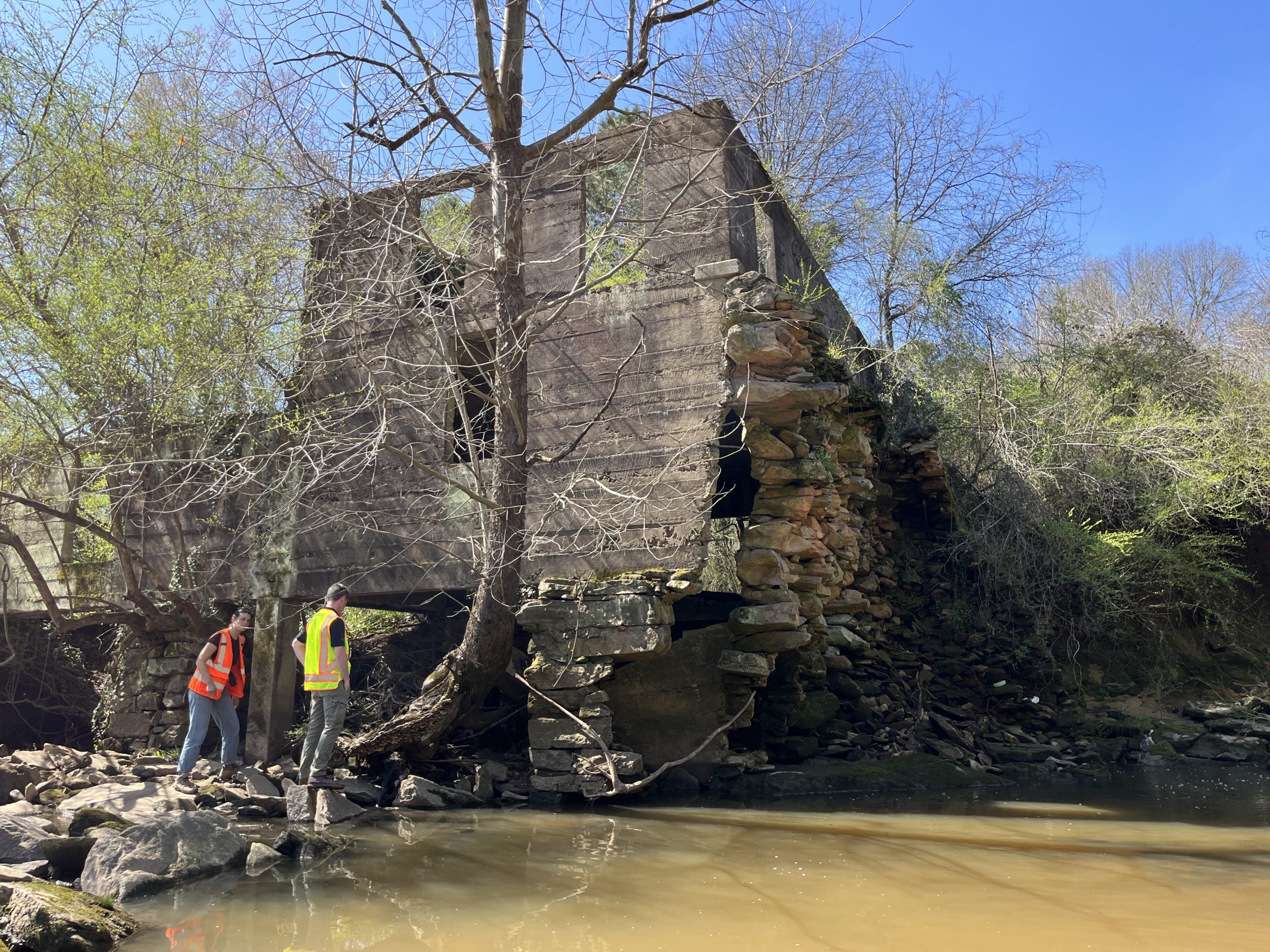 The ruins of Lee’s Mill. (Photo by Georgia Trust for Historic Preservation.)

This ruined mill on the Flint River in Forest Park may have been before the Civil War and operated until 1933 when WL Lee, the head of the family that owned it, died. The wooden portion of the structure was still standing in 1946. But the mill is now a ruin, damaged by runoff from nearby industrial plants and vandalism from intruders on unsecured private property. “

Today, the ruins of Lee’s Mill are a small part of Georgia’s rural past, hidden in the shadow of industrial expansion,” says the Georgia Trust. “…Stabilization efforts will allow this tangible link to a rural past to be preserved for future appreciation of a history that can be difficult to discern in such an intensely developed part of the state.” 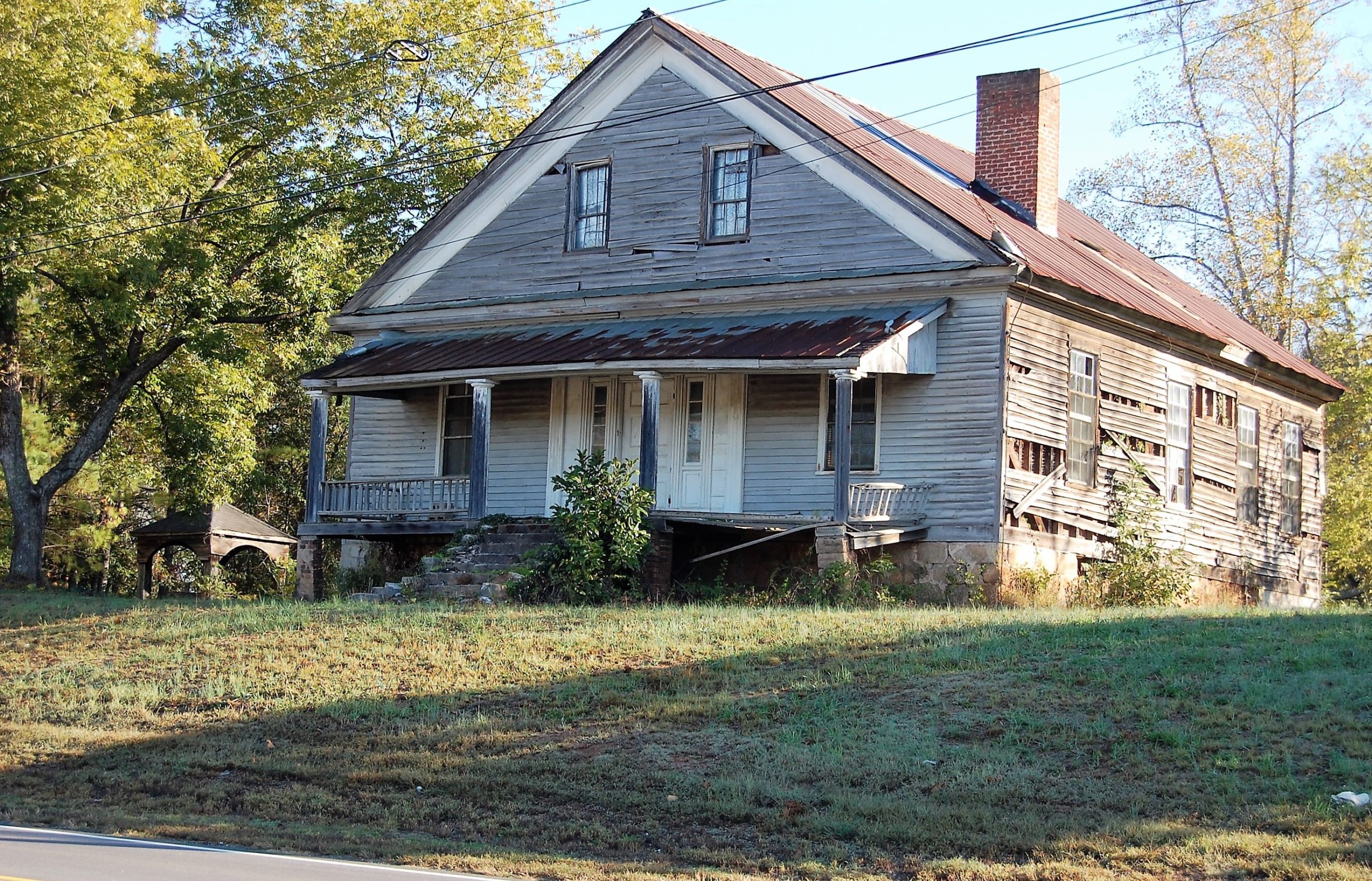 This house in Milton dates from the late 1830’s and was built by Brigadier General and State Senator Eli McConnell, who was an enslaver and “worked to settle conflicts between Native Americans and white settlers in the area and property after the Cherokee resettlement of 1838.” to sell”. says the Georgia Trust. He helped found the town of Hickory Flat and lobbied for the founding of Milton County, now part of Fulton County. The house is also architecturally significant for its Greek Revival design. Today it stands empty and is threatened by development.

“The preservation of this historic home has the potential to allow the public to understand the full history of the area, including McConnell’s role in the forced displacement of native Cherokee, white expansion through the land lottery system, and the development of the area through local and state politics says the Georgia Trust. 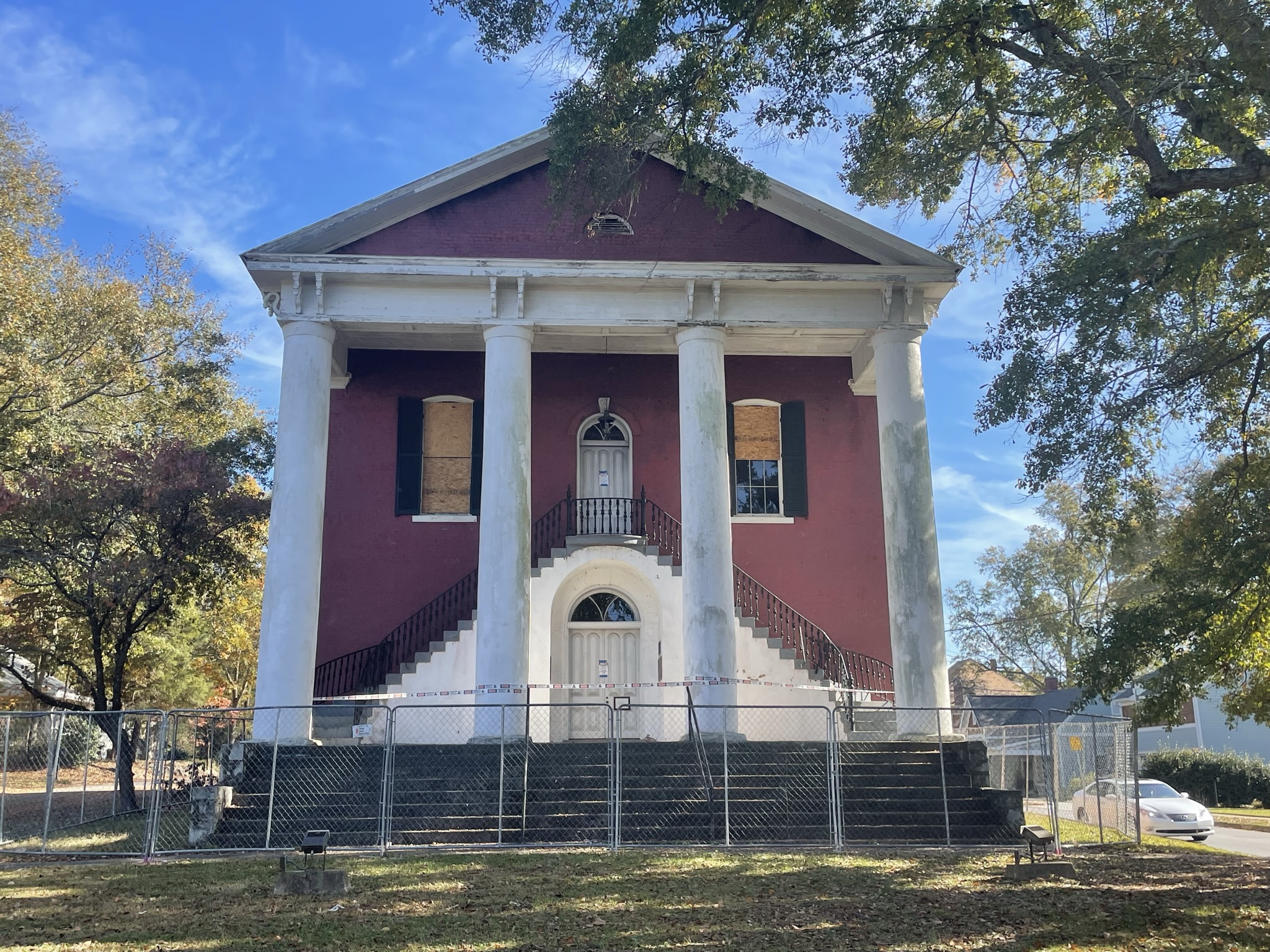 This historic courthouse in Fairburn, now Fulton County, suffered a severe fire in August after being vacant for two years. Constructed in 1871 as one of the last Greek Revival buildings in Georgia, it operated until 1932 when Campbell County was incorporated into Fulton. It has been on the National Register of Historic Places since 1976 and was formerly home to the local history society.

“Members of the community hope to rally support to stabilize and refurbish this historic courthouse and are taking the opportunity to develop and implement a successful plan to bring the building back to productive use,” says the Georgia Trust. 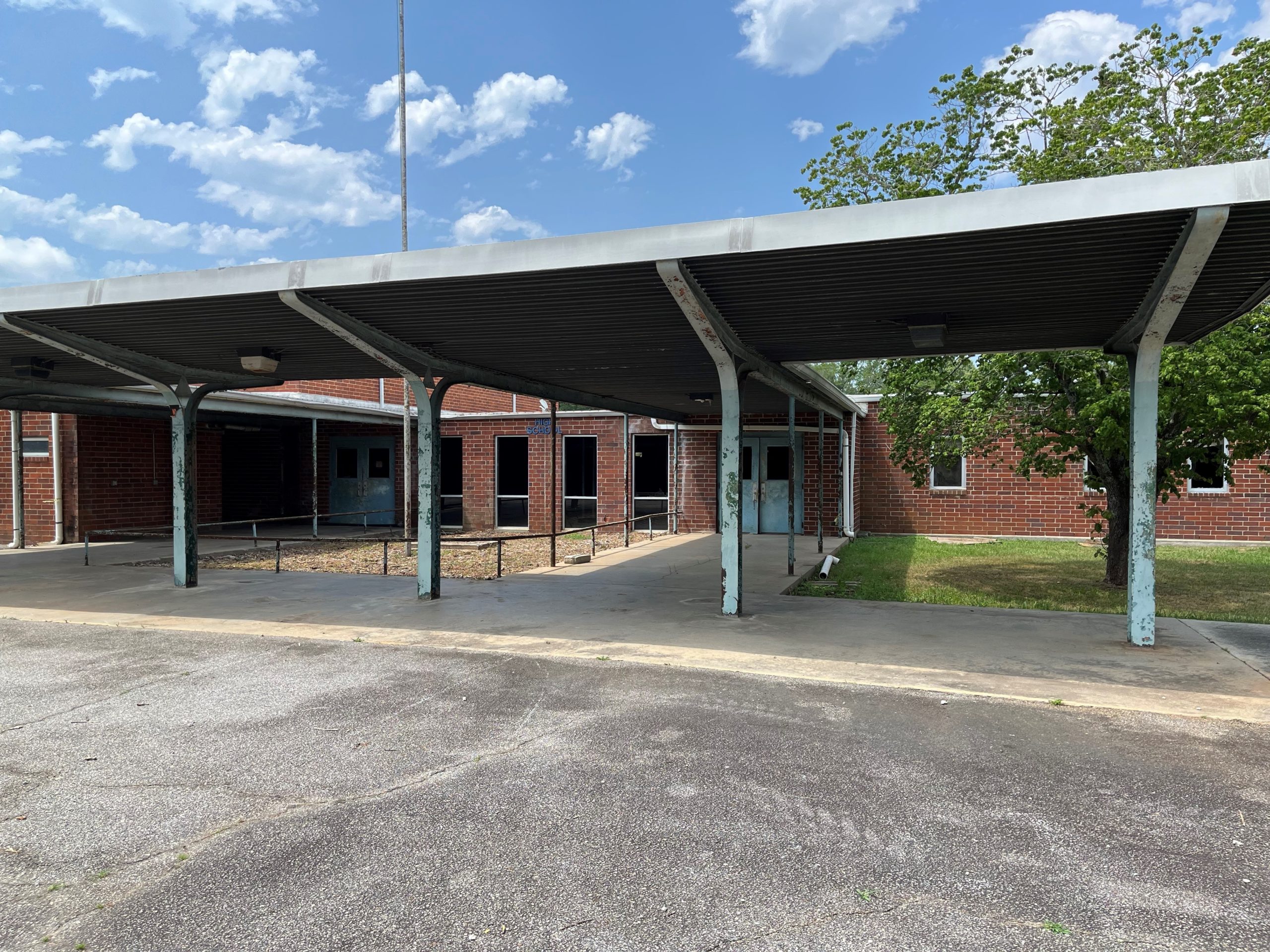 Built in Washington in 1956, this structure was what was called an “equalization school” — an attempt by the state to maintain segregated education with higher-education schools for African-American students. In 1970, a previously segregated white high school was merged onto campus, with that element being renamed Washington Wilkes Comprehensive High School.

“Vacant since 2011, the Training School is an important resource in telling the local and state story of African American public education,” says the Georgia Trust. “The building suffers from lack of maintenance and decay. Contributed residents hope that the Wilkes County Training School will be restored, used as a new space for the community and recognized as an important piece of local heritage.” 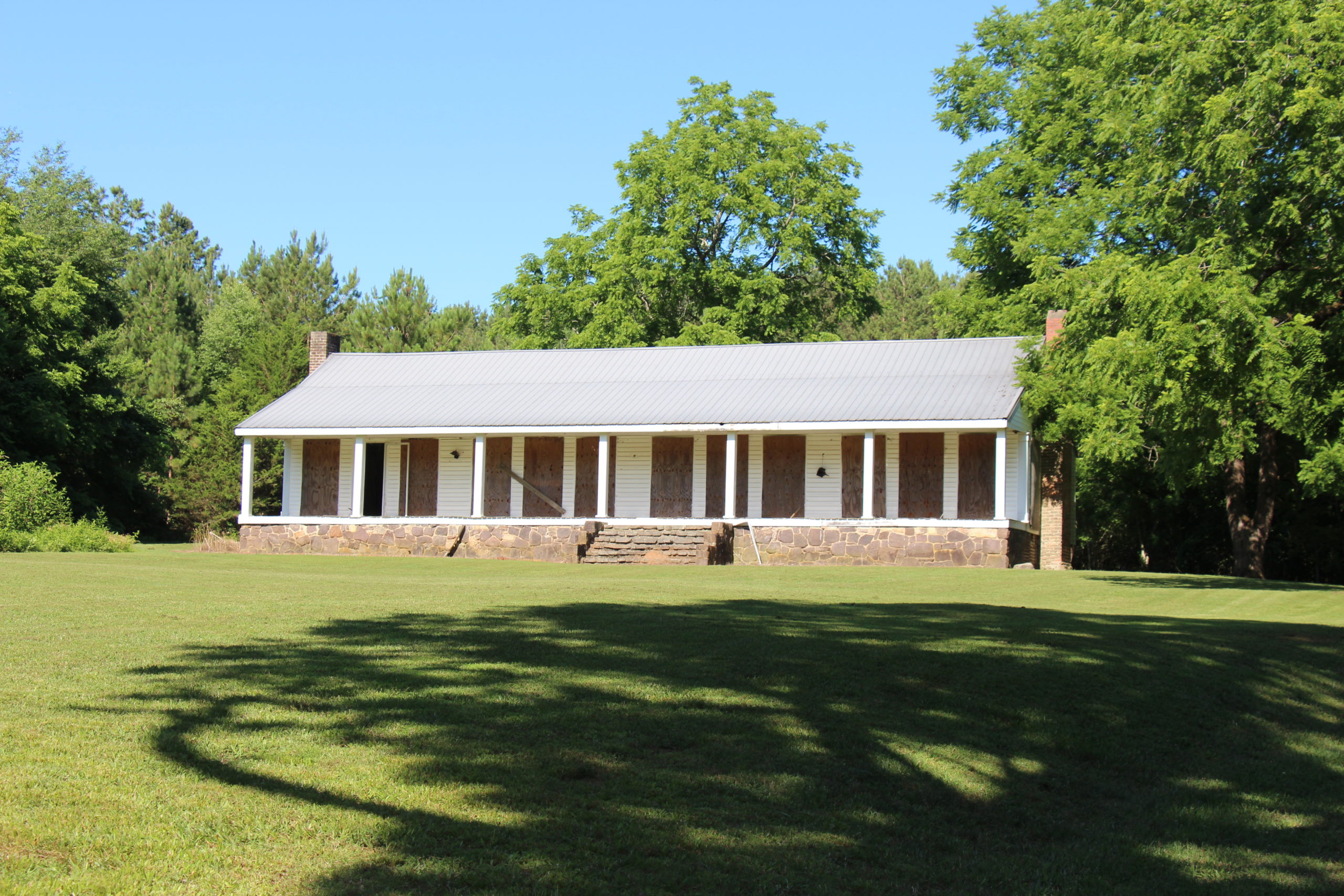 This Ringgold house was built near Yates Springs by Presley and Rachel Thedford Yates in the late 1830s. Presley Yates received the land in the 1832 Cherokee Land Lottery. He was a delegate to the Georgia Secession Convention in 1861—where the state voted to secede from the Union amid the turmoil that led to the Civil War—and voted against secession anyway enslavers.

“Due to the home’s location adjacent to a critical water source that provides much of Catoosa County’s clean water supply, public access and intensive rehabilitation are currently not feasible,” says the Georgia Trust. “The house has been destroyed several times and needs improvement. Options to save the Yates House may be limited, but the property owner, local history society and community advocates are eager to collaborate on ways to preserve this early resource and its unique history.”