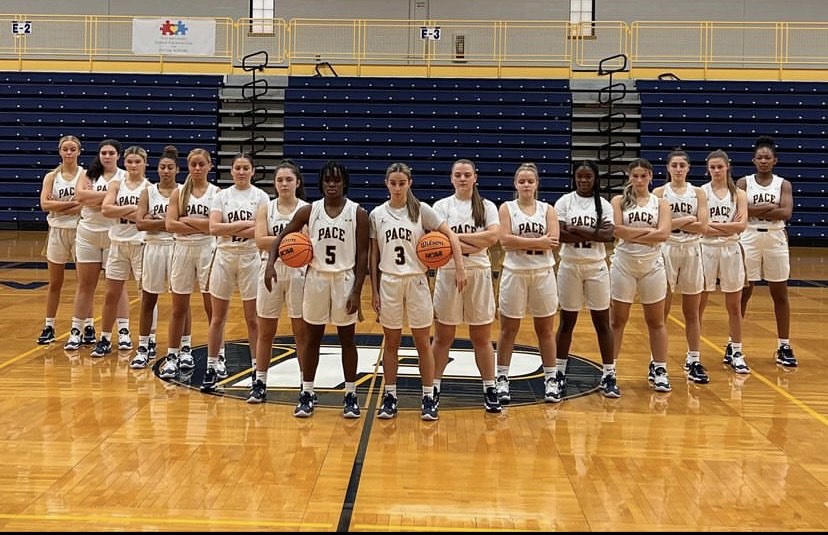 The Pace Women’s Basketball Team has a new look, with a new roster and new jerseys. They hope to build on or follow last year’s success: An Elite 8 Berth and NE-10 Regular Season Championship.

4 newcomers joined the team, the other 11 members came back from last year. In particular, guards Lauren Hackett and Kelsey Quain are back as graduate students making up for the year of eligibility lost in the 2020-21 season due to the Covid-19 pandemic.

The Setters’ new home jerseys debuted on their Instagram for media day, sponsored by the Air Jordan brand. In a TikTok they posted, the side of the jerseys can be seen with a leopard print. There seems to be less blue embellishment seen only on the numbers and letters compared to last year. The team’s street blue jerseys were seen in their first game of the season on November 11 against Daeman College in Rochester, NY

This year’s schedule includes 27 games. 13 games will be at home at the Goldstein Center and 14 on the road. Pace has 7 non-conference games, 20 for NE-10 competitions.

After the game at Damean College, Pace plays Roberts Wesleyan University the next day. On November 19th they welcome the University of Bridgeport to Goldstein, followed by a trip to Staten Island, NY to play at the College of Staten Island. The Setters travel to New Jersey on December 13 to play at Felician University and then return home to play at Dominican College on December 16. Saint Thomas Aquinas College is coming to Goldstein on Jan. 16 to end non-conference play.

On the road, Pace will begin on November 30 with a visit to Southern Connecticut State University in New Haven, Connecticut. A trip to Rindge, NH will begin in December to play at Franklin Pierce University on the 9th. To start the new year, Pace travels to Long Island on January 4th to meet Adelphi University. Three days later there is a road game in the state capital of Albany, where Lemoyne College is waiting for our setters. A week later, on the 14th, it’s on to Worchester, Massachusetts, where Assumption University is hosting. On the 21st, Pace returns to Connecticut, this time to West Haven, where the University of New Haven awaits. Pace plays two games in five days in Manchester, New Hampshire. First it’s Southern New Hampshire University, where Pace WBB found plenty of success on Jan. 28 last spring, and then cross-town to Saint Anselm College on Feb. 1 to begin the final month of the regular season. The setters then migrate to Waltham, MA to meet their conference competitor Bentley University on the 11th and wrap up their road games when they return to Albany to play at the College of Saint Rose.

Watch the Pace Women’s Basketball Team first game tomorrow live at paceuathletics.com, where you can also catch up with the team’s NE-10 regular-season title defense. Be sure to come to the first home game of the year on November 19th.