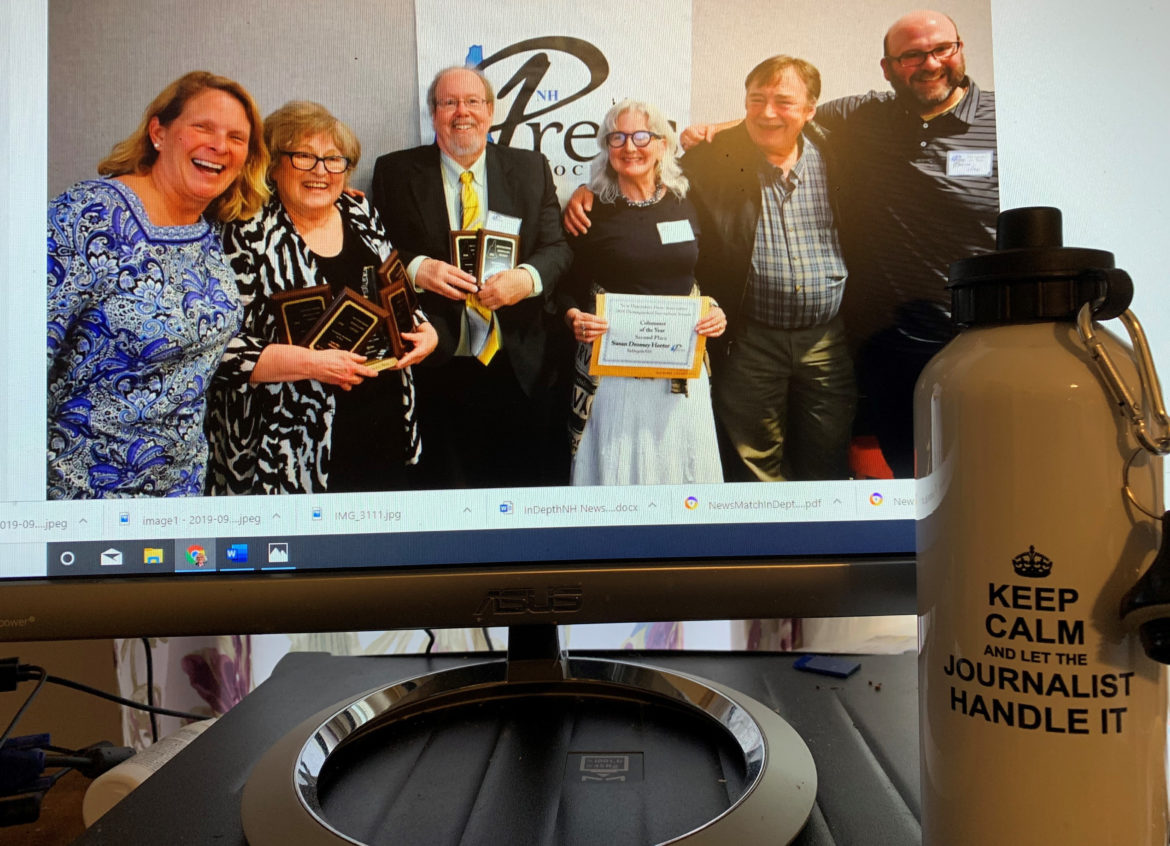 Above: These are just a few of the people bringing you the best news in New Hampshire. From left Paula Tracy, Nancy West, Garry Rayno, Susan Dromey Heeter, Wayne King and Montana West. Bob LaPree took the photo. Not pictured are Arnie Alpert, Bob Charest, Roger Wood, John Harrigan, Michael Davidow, Beverly Stoddart, Chelsea Hensley and the many people who support us every step of the way including Gina Gilmore, Steve Taylor, Lucy Wyman and Gloria Norris.

Nancy West here, Founder of the New Hampshire Center for Public Interest Journalism, Editor of InDepthNH.org. I know you receive many emails asking for your contribution at the end of the year and I’m sure there are many worthy organizations that could use your help. But I wanted to take this opportunity to share with you why we are different and why we need your support now more than ever. We’re in the middle of ours NH Sustainable News Summit Project and we need to raise enough this year to build the business component of this nonprofit organization so that we can eventually pay our own way.

I founded InDepthNH.org in 2015 with a little savings with a mission to give a voice to marginalized people, places and ideas and hold those in power accountable. Now joined by people like Garry Rayno, Paula Tracy, Bev Stoddard, Bob Charest, Roger Wood, Michael Davidow, Arnie Alpert, Wayne King, Damien Fisher and moreover, we do this every day through stories like coverage of this somewhat wild election. Our reporter Paula Tracy will be covering election recounts again today. Two races have already been reversed and there are many more recounts pending in the House of Representatives, which now has 201 Republican seats and 199 Democratic seats. It’s a cliffhanger and we’ll keep you posted.

It’s also happening more on the front lines of the Laurie List, that is, cops who have been disciplined for dishonesty and excessive use of force. Yesterday a district attorney agreed to review a decades-old conviction because the defendant was not told before the trial that the police officer who testified against him had credibility issues. We are the only news agency still fighting in court to get ALL the names of the 250+ officials on the list, not just some of them.

You won’t find this coverage anywhere else (certainly not on the national news!) because it covers the issues that impact your daily life most – school funding, government spending, waste, the environment and investigative reporting from the state’s most trusted journalists. We also highlight the state’s authors in Bev Stoddard’s column The life of an NH writer. We are also working to become the go-to place for all obituaries that are affordable and not behind a paywall because it is in the public interest to do so.

As a nonprofit organization, we depend on the support of readers like you to keep this important work going. That’s why I’m excited to announce that we have an incredible opportunity to increase the impact of your donation through NewsMatch, a call to action in support of nonprofit news organizations across the country. From now through the end of the year, NewsMatch and some local funders will match your new monthly donation 12 times, or DOUBLE YOUR ONE-TIME donation, all up to $1,000 per person. We can make up to $29,000 in Matching Dollars which means InDepthNH.org can raise a total of $58,000 and we are looking for more local matches so we can bring that to $100,000. I know we can do it. And we must become self-sustaining.

For a non-profit, independent organization like us, this is a big deal and will help us deliver the kind of insightful journalism you expect every day. It’s the kind of reporting that can make a real difference in New Hampshire. We are old school. We cannot be bought by powerful people with lots of money. We are worthy of your support.

What are you saying? Will you invest in community-oriented journalism?